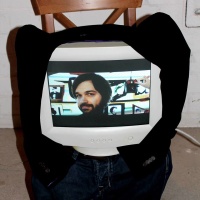 Remute, who is active in the Techno-game since over 15 years and well-known for hits like 'Zuendli', 'Play The Game' or 'Gravity?', returns to Revision with an Amiga-DJ-Set feat. PT-1210 mk1! His recent album 'Limited' was released on Vinyl and good old 3,5"-Floppy and contains some raw and banging 8Bit-Techno, Acid and Electro - .mod kills the mp3 industry! So let the floppy click and the bass kick! Get ready for Remute at Revision 2018!

Lesnik (real name Piotr Lesnikowski) is known from the 90s and early 2000s as the creator of chiptune / 8bit and demo music. Nowadays, as a producer of electronic music combining genres such as drum and bass, acid jazz and other electronic styles, he uses self-made soft synths to create atmospheric, emotional moods. An audio-visual experience presenting nostalgic drum & bass with a lot of dreamy melodies accompanied by moody visualization: one-hour visual story about childhood, adolescence and emotions (mostly original footage, recorded and mixed live on stage by Jacku). You can sit and listen/watch or dance like there's no tomorrow - you decide!

Logicoma bring their critically acclaimed, Dino approved live show to the main stage at Revision.  2/3rds colourblind, 100% hipster, the trio consists of Ferris, Wobble and Hoffman who will be playing a bass heavy selection coupled with live syncopated visuals - forming an intense audiovisual experience you don't want to miss!

Syntax Error is a monthly club night in Stockholm with a 16 year history of success. It's a place where you can compete in Street Fighter with your friends, show off your Zapper-handling skills in Duck Hunt, go crazy on the dance floor to video game remixes, Disney hit songs and C64 SIDs, compete in a geeky quiz walk, win super-weird prizes, drink beer of course, dress up in your latest cosplay creations without everyone staring at you, build the highest Jenga tower of the night and argue over Star Trek captains.

Tronimal is doing cybertastic digital chipmusic since 2008. ╰(●′▾‵●)╯ Mainly composing on Nintendo Game Boy while thinking about pandas, humans and robots in expansive space. ✧⁺└[∵┌]└[ ∵ ]┘[┐∵]┘⁺✧ For the love of old machines he also used the Sinclair ZX Spectrum, Atari VCS 2600 and other video game consoles and computers to bring intelligent music design to the blue planet. ♫꒰･◡･๑꒱ On his adventurous journey he finally discovered the beautiful demoscene a few years ago and fell in love immediately. （*’∀’人）♥ Due to this he is coming to the revision demoparty to bring some heavy and melancholic music to you! (￣▽￣)V

Le Goubeur and the Danish Unicorns

The Danish Unicorns once lived in the mythical forest Dhramm, roaming far and wide. Their home was destroyed by acid rain, forcing them to take shelter in the Norwegian jungle Beisch. Here, they were not alone - the rumorous and maniacal troll Le Goubeur, originally from the island Go'atran Ce, welcomed the strangers to his domain. And so the inhabitants of Dhramm and Beisch were joyful and danced happily, until the demon Gab'Ba made eternal darkness emerge.

If we exclude the traditional DJing with rp and lug00ber for the shader showdown events, it's been 2 years you haven't heard of Alkama. He was in fact engaged in secret exploratory missions to prepare Mars soil for the upcoming Nasa landings. While he couldn't find any biologic traces, he uncovered some pretty cool tracks. They're loud enough to put the void into motion so they'll be a perfect fit to wake you up on Sunday morning! Dare try to attend the second stage. Dare try to come grab a coffee. WE DARE YOU!

Having conquered the Amiga scene in the early 1990's with the legendary groups Lemon. & Anarchy, here Dan will be showcasing another of his lifes passions. Having DJ'd for over 25 years, in some of the best clubs & venues from Belgrade to Ibiza, here he will be showcasing his love for deep house, slo-mo disco re-edits & funky beats with a splash of soul thrown in for good measure, seamlessly mixed off vinyl only, for the perfect sunday afternoon chill session.

Where has this guy not already played? In small and large clubs, at demoparties, at weddings, in his bedroom, at fetish parties, the Netherlands - basically everywhere! Having mastered the art of DJing at the wee age of 3 weeks old, his career did begin early but took a dive when he finally hit puberty at 38. Nonetheless he will bring a selection of danceworthy tunes which will be played in a volume that is very suitable for both dancing and listening.

In the beginning, there was Paula, and Paula had a four channel groove. "Two Amigas, two amigos" will play a special set for Revision including not so often heard tracks from the deeps of mod archives. Mayor, from the Simulaatio organising team has been involved in the scene for more than 20 years, while listening to mod music for almost 30. Vinyl dj from profession, he found out about the PT-1210 djing tool and was super excited to try it out at Datastorm 2014, where Hoffman & co released the software. Altraz, also listening to Amiga music since 1992, finally hit the Scene in 2017. Doing the music for new amiga games he also fell over PT-1210 - while partying to Mayors Revision 2017 set. Producing and releasing Trance and Electro music for several years now, he is excited to finally be in the underground. That is where he comes from, namely Protracker wonderland.

"You know you're at a teknoparty when the distortion patterns seem to be structured" someone once said to Numtek. As a part of the Langweiligkeit label he has played at various tekno and squatparties, effectively dividing every dancefloor in two: those who run away and those who line up in front of the speakers.

Revision is sponsored by